What’s up, folks? I haven’t posted in a while, so hopefully my writing isn’t too rusty. I am just going to jump right into it.

Are you a vegan? Do you like chickens? How about eggs? No? Don’t remember what they taste like? Well, let me give you a description of something that will help to refresh your memory. I bring you The VeganEgg by Follow Your Heart.

If you haven’t heard of Follow Your Heart, they are a cute vegan company focusing on dairy substitutes. The company actually gave me my first taste of vegan cheese when I was just starting out back in high school. Their meltable nacho and mozzerella cheeses were my favorite for nachos and grilled cheeses.

In the last few years they have expanded into making slices, salad dressings (like bleu cheese and caesar). You may not have heard too much about them, because nowadays, Daiya, the veg-famous brand out of Canada, has sort of taken over the vegan dairy market. I am pretty sure that Follow Your Heart will now be put into the very bright spotlight with their new VeganEgg.

I found it in the egg section! It was in a carton, just like the real thing.

And has very good instructions on how to prepare it right on the carton. 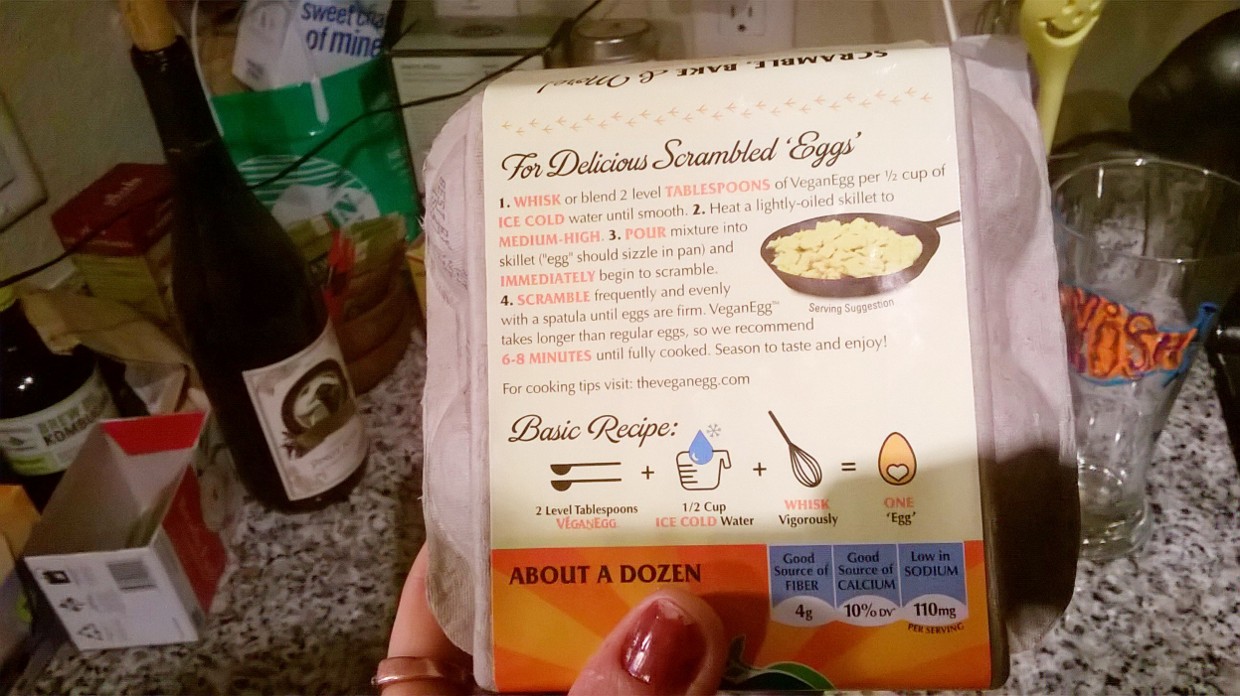 Now, I am sure you are wondering, what does it look like? Well, the eggs are not in fake shells or anything (which is what I thought and kind of hoped before opening it). As with many preparable vegan subs, it first comes in a powder. 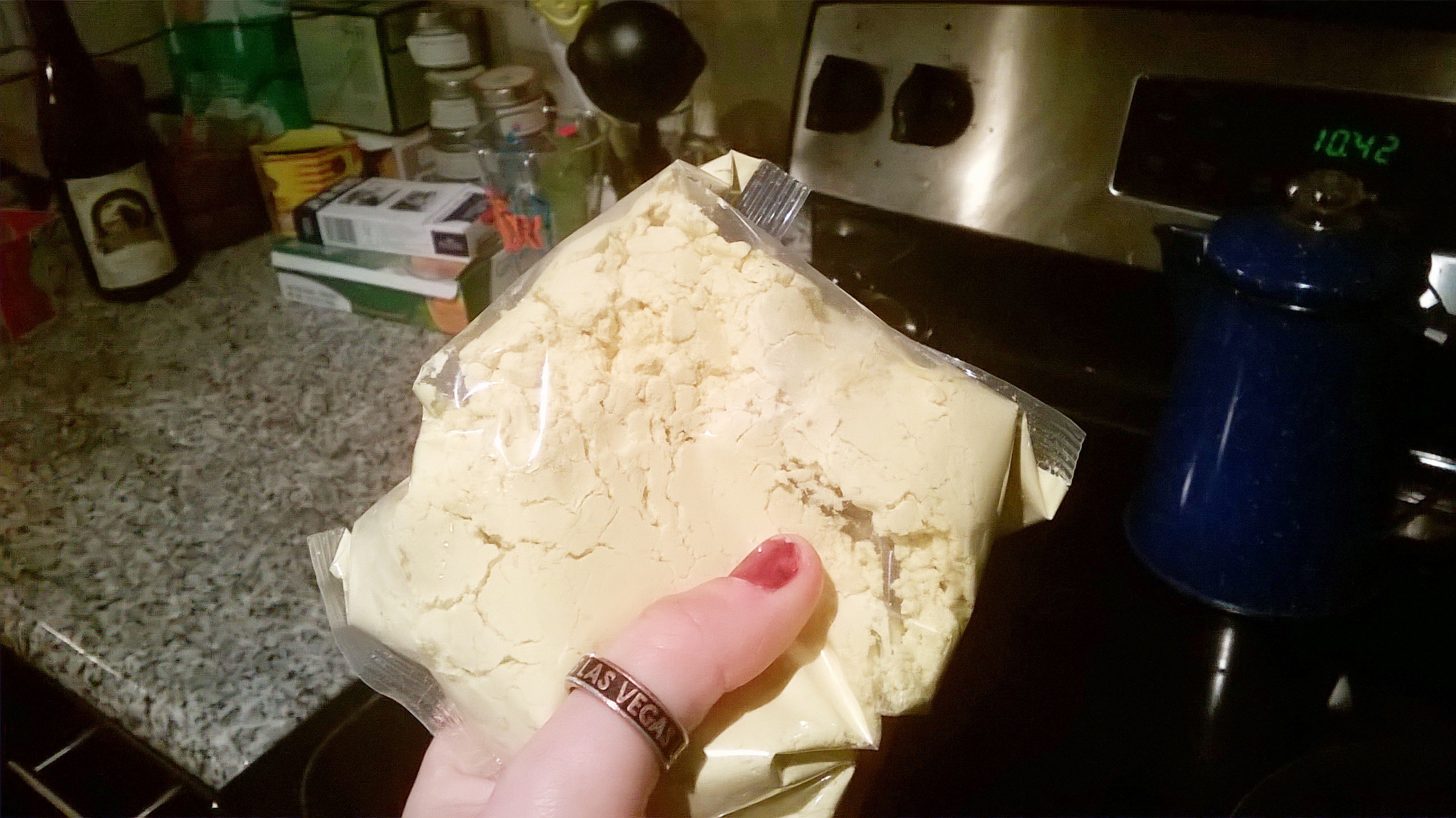 The preparation is painfully easy. Just add a small amount of ice cold water and mix, then cook it as you would a real scrambled egg. It takes a few more minutes than traditional, but I mean that is no big deal.

I’ll be honest, I was skeptical at first but also open minded. Now having been a vegan for six years, I have been around the block. I now know that sometimes when tasting a vegan substitute, it is not going to always be close, or even remotely close, to the real thing, but whatever. You develop a love for the new types of food in your life and you are happy and totally satisfied. However, when I started making the mix, it was immediately apparent that this stuff was different. They use black salt in it, which adds the sulfur quality to the scent and taste of eggs. I was quite pleasantly shocked!

At first it looks a little gooey… 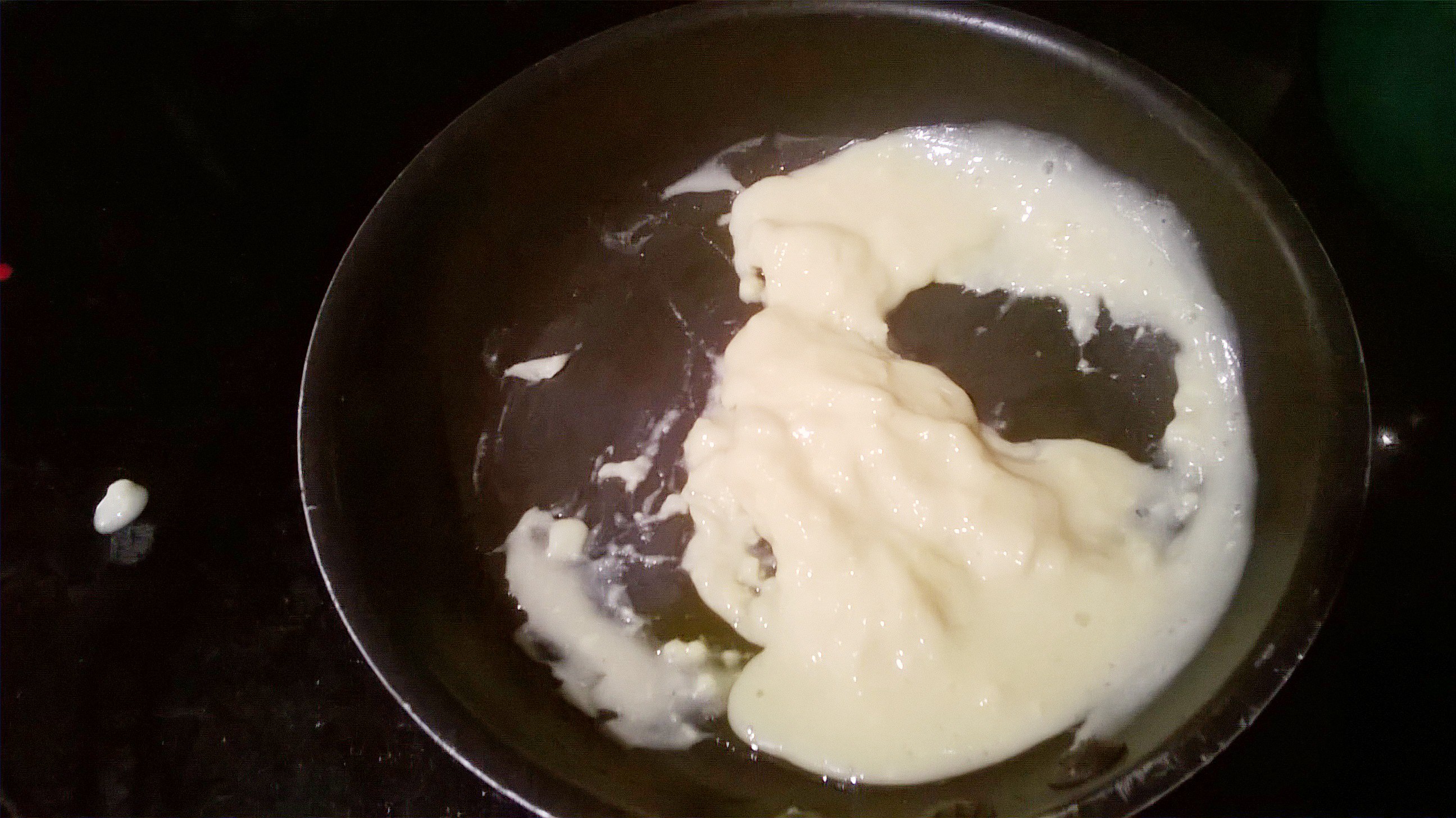 And then, it starts to look familiar… 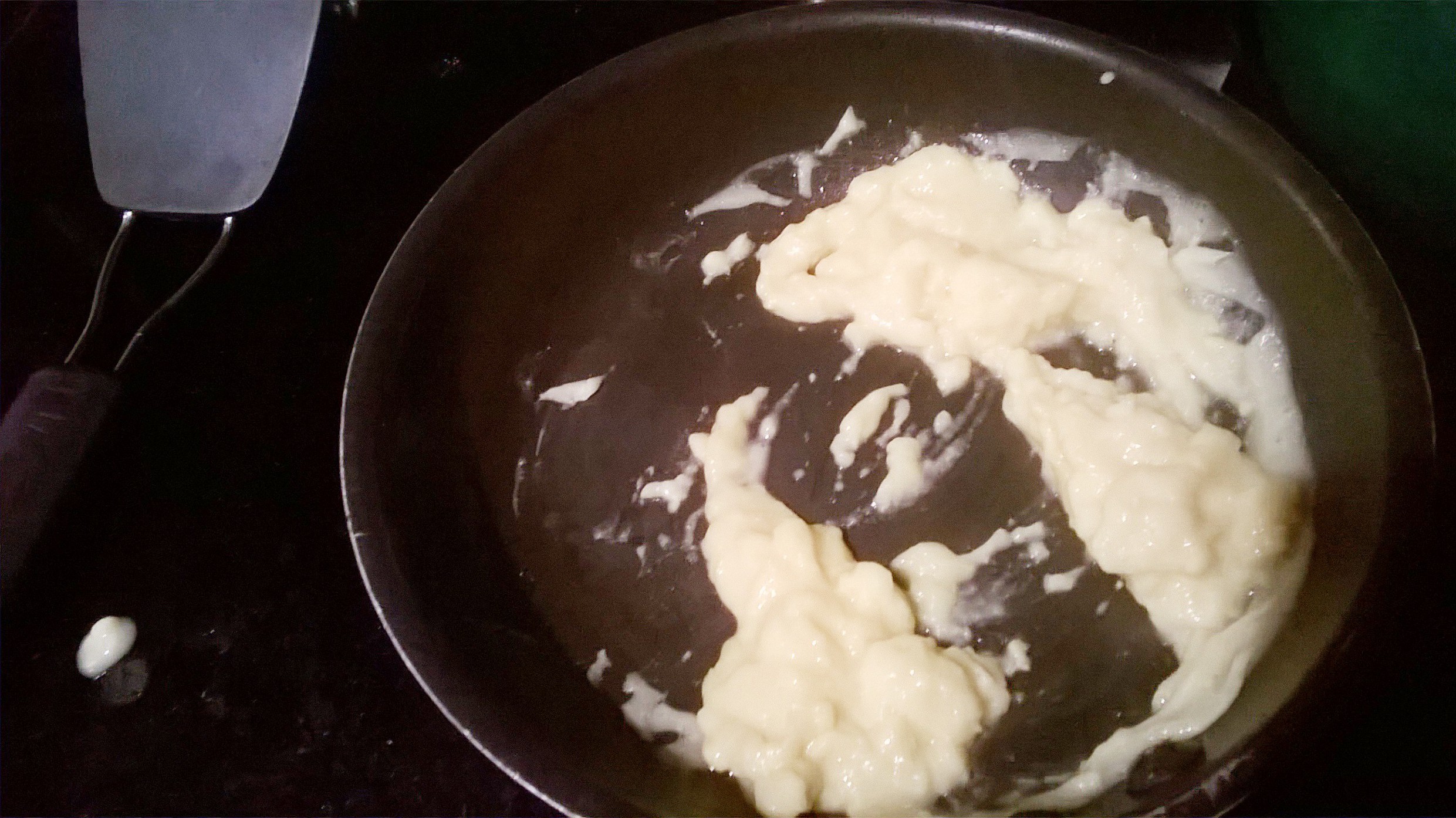 All done in about ten minutes. They were pretty yellow in the pan, too, but I had to adjust the lighting of this picture because my stove is not well lit. It was blowing my mind. They sizzled and crackled like the real thing, and they smelled just like them! I felt like I was back at my mom’s house as a kid, waiting for Sunday breakfast.

I decided to taste them just as they are, without adding a crap ton of sriracha and guacamole like I do when I make tofu scrambles. I made them onto toast in the pic…but later turned it into an egg breakfast sandwich, which is just about the best breakfast ever. Check it out–don’t it look eggy?! It tasted amazing. I was alone but had someone been around to secretly record my reaction, they would have heard lots of “WTF?”s and “OMG this is amazing” outloud, about every 20 seconds. 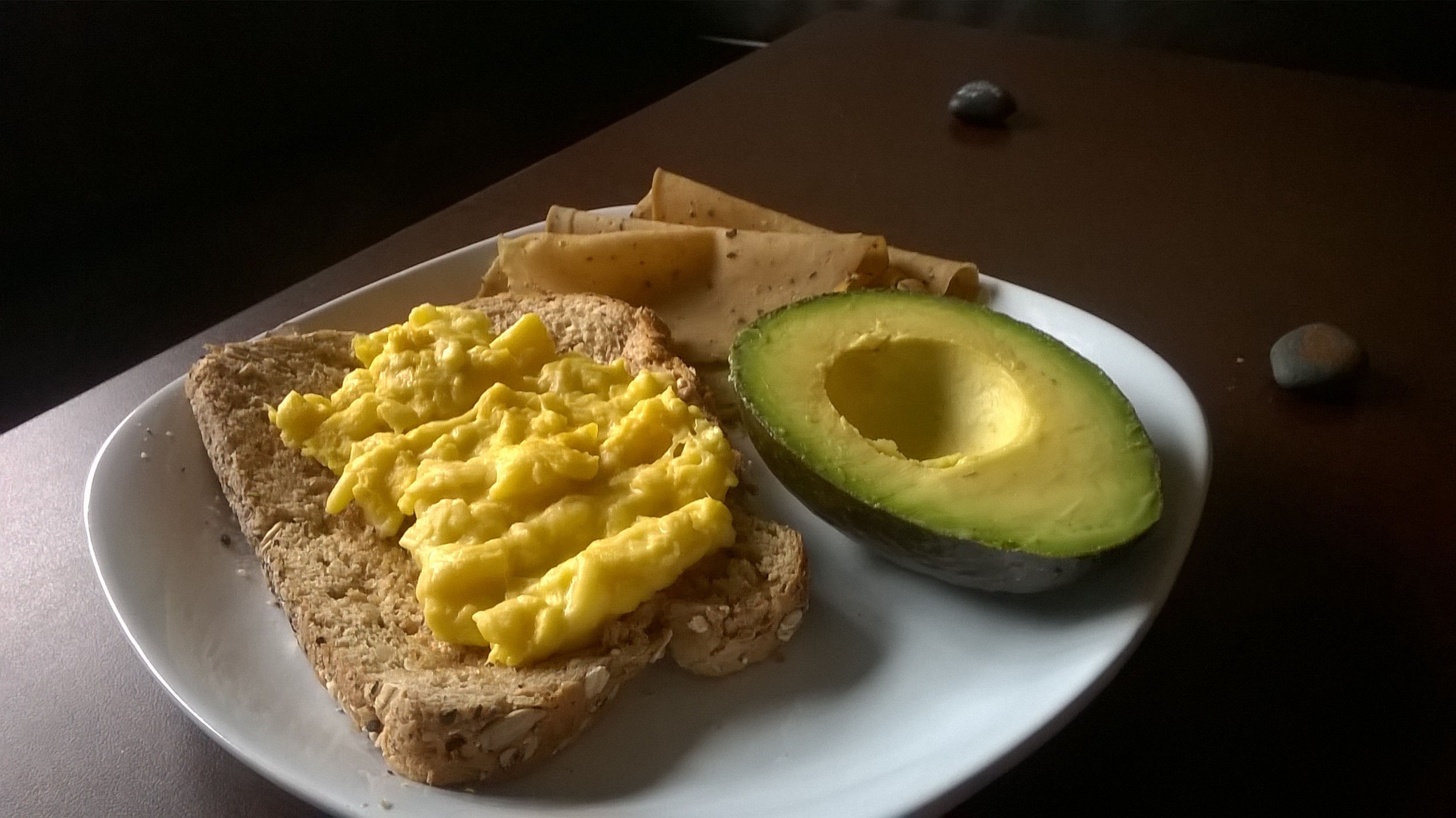 I made enough for one serving, which on the package says equals one egg. The package cost $6, and there is enough for 6 servings. Not bad at all! It is also versatile: you can use it for omlets and baking too! The eggs are mostly algae based, which is what makes it possible to have this very realistic texture. Overall, I give the VeganEgg about 11 out of 10 stars, 9 for taste, and two extra for shock factor.

The vegan world is changing every day. If you or someone who you know think that it is hard or expensive or boring and tasteless to be vegan, please, I urge you or them to…just google vegan food. It is every where. You can go to any chain restaurant now and order a veggie burger. You can go into Starbucks and order a coconut milk latte. You can buy vegan food at convenience stores on the road. We have labs creating all sorts of delicious and nutritious plant based foods that are indistinguishable from real meat or dairy. And you have great companies like Follow Your Heart doing their part and bringing the delicious tastes of cheese and eggs to the vegan table, finally. People are running out of excuses not to make the switch to this awesome lifestyle! What’s yours?

Until next time! Leave your comments below, and if you try the VeganEgg, share your experience with us! 🙂